Noise Control Engineering was called in during the permitting process of the construction of four 33-Unit 3-story residential buildings to ensure the HVAC equipment would not generate excessive noise. Each building had 34 individual heating and cooling units on the roof, recessed into a 4-foot well, and we used environmental noise modeling software CadnaA to predict the sound pressure levels at the site property lines. To create the model, the site plan was scaled to the correct physical dimensions and geo-referenced to ESRI satellite imagery using QGIS Geographic Information System software and was then imported into the CadnaA software. For each building, the 34 noise sources were modeled as distributed area sources and the 4-foot well was modeled as a barrier.  To be conservative, it was assumed that the effective noise sources were located at the top of the barrier.  Seven receptors, modeled at a 5-foot height, were located at the property lines around the proposed site.

Sound pressure levels for both the heating and cooling cycles of the units were obtained from the manufacturer’s technical service manual and were converted to sound power levels for input into the prediction model.  The total octave band sound power levels for 34 units running simultaneously were calculated and then applied to each of the four distributed area sources.  Noise levels at the receptor locations were then predicted.  Based on the predicted levels, it was concluded that the units would not generate noise that is a nuisance or offensive and would in fact be below the likely background noise levels at the abutting residences. The permit was granted. 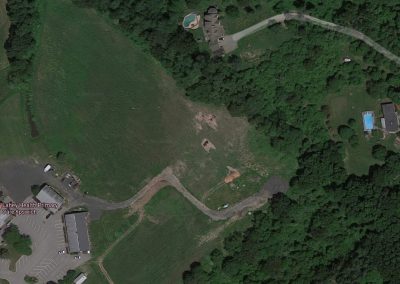 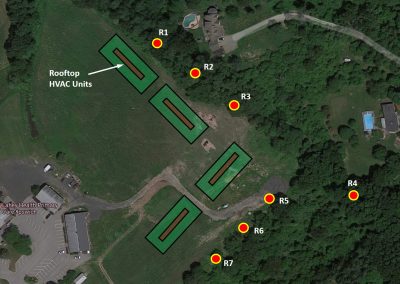