The Peralta, a passenger ferry belonging to the San Francisco Bay Water Emergency Transportation Authority (WETA) fleet, had been experiencing high vibration levels in areas near the transom and cracking developed as a result. Multiple surveys had been performed which confirmed the high vibration levels but the source and the cause were still undetermined. NCE was called in to work with WETA and Aurora Marine Design to uncover the root causes of the vibration and cracking. The potential for structural resonances was inspected by NCE and ruled out before NCE identified the propeller design as the source of the problem. The design had been creating excessive pressure on the hull, leading to high vibration. The propeller was redesigned by a third party, and subsequent vibration levels were significantly reduced as shown through NCE’s follow-up measurements. Dynamic stress analyses performed by NCE showed that cracking is not expected during the vessel’s remaining service life–and well beyond. 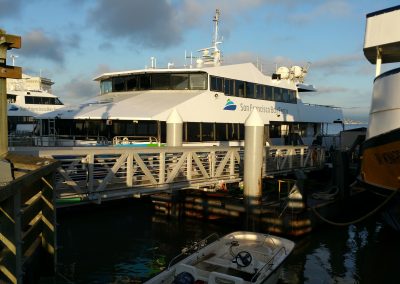